Skramstad/Morthov Samdrift is located in the southeastern part of Norway, an hour north of Oslo. This is a co-op run by Lars Skramstad and Stein Morthov

Norwegian Red has always been focused on health and fertility traits, and therefore, as result, I rarely have cows in the “hospital” pen.

The co-operation is a dairy farm with 70 Norwegian Red cows in addition to fattening bull calves giving the farm a total of 200 animals. The farm is operated with a milking robot and the average production data is 9.300kg/cow/year milk yield, 4,21% fat, and 3,63% protein. The average calving interval is 11,9 months and cell count on 62 000. There are 120 hectares of cultivated land, with 40 hectares of owned land belonging to the farm. There are two employees helping to run the day-to-day operations at the farm, one in the barn and one part-time carpenter/tractor driver. This is the perfect setup for Lars as he also has a full-time job in addition to the farm.

Both owner and employee at Geno

Lars is one of the owners of Geno but also works full-time as the Chief Financial Officer for the dairy cattle breeding organization.

"As a farmer myself and being a member of Geno’s cooperative structure, I can influence the decisions and the directions of the company, including the breeding goal and how we can improve Norwegian Reds genetics faster."

Lars believes that in addition to having a full-time job for the organization breeding Norwegian Red on the side of being a farmer offers him a complete view of both perspectives. He knows how farmers work in Norway and what goals need to be reached to supply the best dairy products for the local market. While at the same time understanding the importance to contribute the needs of the global market and supporting those demands.

"It is very rewarding to be a part of both processes and ultimately combine our efforts to provide dairy farmers around the world with the most profitable and sustainable breeding genetics." 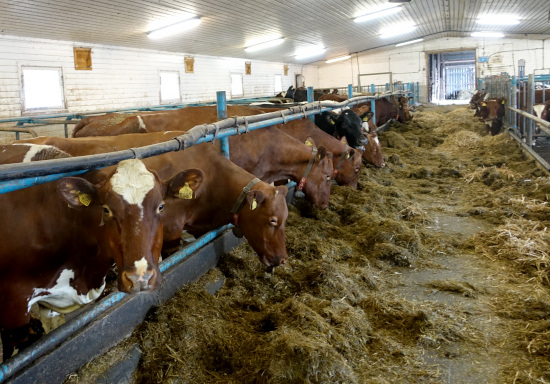 Big improvements in the breed and technology or good genetics that make life easier?

When reflecting on how the Norwegian Red was 20 years ago versus today, Lars sees major improvements. With the help of new, and better technology, continuous research, and data collection he sees a faster improvement in the herds and thus experienced a great increase in production, particularly kg of milk solids and improved udder conformation. As a result of Norwegian Reds' focus on health and fertility traits, there are rarely any cows in the hospital pen.

"Heath and fertility have a tremendous impact on my operations’ profitability, with most of my cows in excellent condition and producing well every day of the year. This is the best a dairy farmer could expect from his herd: easy running cows with good production, enjoying animal welfare, and much less demanding work on the farm. Norwegian Red genetics has been providing me with all these great benefits."

As a dairy farmer himself, he has a lot of expectations when it comes to genetics, and they have a big impact on his day-to-day operations. Profit is very important and how he can continue to operate the farm sustainably. He needs to produce enough milk cost-efficiently, and it is a balance between cost and revenues. It is important for Lars to have cows in the herd that delivers high-quality milk with high solids as this is where most of the income comes from. The herd also has an excellent fertility rate which has a direct positive impact on the operational costs, they also have good general conformation that works well in the robot, making his life easier. In addition, ensuring good animal welfare to the cows is also a must in his operation.

"When looking at the figures from my herd, I am happy to see cows that rarely have any disease during the year, as this is an important indicator of good animal welfare."

Lars has been involved in introducing the Norwegian Red dairy breed globally. Because of this, he has traveled quite extensively to meet international dairy farmers milking pure Holstein and Norwegian Red crossbred cows in a variety of environmental conditions. Holsteins are known for their good milk production, and the breed has been extensively used by dairy farmers around the globe to achieve good production results. One of the most relevant “take-home” messages he has gotten on his trips is that many dairy farmers are experiencing situations where their Holstein cows are no longer fitting well with their present needs as they used to in the past. This is where crossbreeding and selecting the right genetics to cross becomes important for them, and a great solution. The farmers are experiencing great benefits from combining Holstein with other dairy genetics, like Norwegian Red.

Speaking from his experience as a farmer, Lars describes Norwegian Red as a unique dairy breed with unique traits due to its historical breeding program developed in Norway since 1935. With continuously improved genetics, he believes that crossbreeding is a great opportunity for dairy farmers around the world as Norwegian Red has great complementary genetics, and traits, that Holstein herds can take advantage of.

"With the growing demand for Norwegian Red genetics worldwide, it is proven that Norwegian Red has contributed to so many successes as a perfect crossbreeding match for other breeds, especially Holstein."

Lars explains crossbreeding with Norwegian Red as a matter of optimizing profit per cow per lactation due to lower maintenance feed costs, improved fertility, fever unproductive days, and approximately the same value in milk output. He believes that cows that are easy to manage also contributes to a positive impact on farmers’ life and not only their net profit.

Just like all farmers, Lars would like to have a good work-life balance while working to maximize profitability from the farm. The Norwegian farmers are maintaining good animal welfare and health in general, thanks to the well-regulated national health system for all livestock animals. The animals are using very little antibiotics which contributes to a healthier cattle population. Lars tries to avoid having unhealthy cows as this is troublesome. He says it is extremely stressful for him when he has a sick cow, not only because of loss in production but also because the animal is suffering.

When asked what traits mainly affect the profitability of his business, he says, the problem-free-cow. He needs cows with high production, high feed efficiency, and great health for the cattle’s entire lifetime. 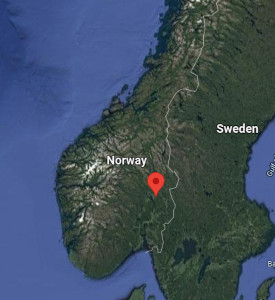 Geno is the breeding organization of Norwegian Red cattle, the main dairy breed in Norway. It is a farmer cooperative that has been conducting research and development for cattle breeding since 1935.

There are around 200,000 dairy cows in Norway and approximately 92% are Norwegian Red.