A progressive dairy farmer who embraces innovation and believes that technology has helped dairy farmers to accelerate the genetic progress of the herd, thus improving cows’ performances. "In 2021 the entire herd only needed 2 visits from our veterinarian. Health status of Norwegian Red cow is amazing."

Anders Røflo dairy farm is located in Trøndelag county, a prominent agricultural area in the middle of Norway. A progressive farmer, he has been dairy farming since 1991, and is running his farm together with his wife.

Like many of the dairy farmers in this region, Anders is very passionate about cows and breeding. In this respect it’s worth mentioning that over the years he has been providing bull calves for AI to Geno and more recently he has been very active in supplying also high genetic merit heifers for Geno’s embryo program.

He’s in general very keen on the development and the potential that technology has provided to dairy breeding, helping farmers to accelerate the genetic progress of the herd and thus improving cows’ performances.

"I embrace innovation and been taking advantages from new technologies as I also genotype all our calves (both males and females). I am also using REDX (Norwegian red sexed semen) on our best animals with very good results."

In the past ten years they have been increasing the number of milking cows. The milk production per cow/year has been improved by 23 percent while keeping the same level of fat percentage and raising protein percentage significantly. "We installed the milking robot in 2013 and of course one of the reasons we increased milk yield/cow is because of that but it’s relevant to say that we registered improvements year on year continuously even many years after we change our milking system. It’s also significant to say that in the period 2012-2021 we fed the cows with the same number of concentrates (no increase)."

Fertility has been always great with approximately 12 months of calving interval and health status that remained stable or had improved for specific traits for Ander’s herd. Mastitis frequency is very low, and zero cases of ketosis were registered since 2012. In the entire year of 2021, there has only been two veterinarian visits.

"I’m happy with these great performances and I know genetics has been very helpful to this achievement."

Anders believes that Norwegian Red has done a lot of significant improvements. The traits he has experienced with the biggest improvements are milk yield and protein. "Udders of my youngest cows are also better than in the past and I’m still giving high emphasis when I select Norwegian Red bulls to use in my breeding plan". He uses a breeding advisor, Hans Snerting, to set up a strategy and breeding plan. Hans has been a breeding advisor in this herd for many years, and he’s been doing a great job according to Anders. When choosing bulls, milking speed is also an important trait they put emphasis on.

As many Norwegian dairy farmers do, Anders also keeps all the bull calves for fattening. The only exception is bulls sold to Geno as possible future AI bulls. He keeps the bull calves as it is another source of income other than milk production. Norwegian Red is a dairy breed that also has great beef traits, especially when it comes to bull calves. Most beef in Norway is produced with Norwegian Red because of this. In 2021 the average slaughter weight of Anders’ bull calves were 303 Kg with an average age of 16 months. 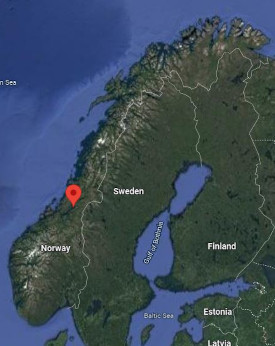