Looking into the future of Dairy farming through Gobetti Dairy Farm today.

“Uniformity of the herd, on every level, has significantly improved over the years for the Gobetti farm, specifically, udders conformation that has made considerable progress”

It may be a bit too early to define Gobetti farm as the dairy herd of the future, given the many uncertainties at present times and the unprecedented outlook of the global dairy industry. But surely, at the Gobetti brothers in Scandiano (Reggio Emilia, Italy), it is already evident to find the implementation of guidelines which – by choice or necessity – all the livestock farms will have to follow, starting with the dairy herds. 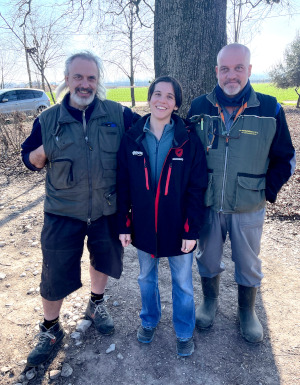 What makes them the epitome of the future dairy farming? First of all, it’s all about the health status of the herd as their strength, in its broadest sense.

This situation has namely resulted in a smooth management system, and good fertility (or, rather, I should say great in this specific case). The use of antibiotics is extremely low, and the selective dry cow therapy has been in place for a decade. The herd’s size decreases over the years (fewer milking cows and much less replacement), but the total milk produced remains at the same level as before, while in return, animal welfare has been improved due to more available space in the barn. And of course, this means less feed needed and less manure produced.

Finally, but certainly equally critical, the rising importance of the beef income contributed from the sales of higher value bull calves - with the majority being Belgian Blue crossbreds – and cows at the end of the career sold at good prices thanks to their good condition.

A project developed over the years

Taking a more detailed look on the farm’s profile, it helps us to better understand how this has been translated in practice.  It is important to emphasize that dairy farming and breeding are both processes that will inevitably have to be carried out in the long term. Farmers need to think about their goals ahead of time, to have clear ideas and to make consequent choices.

A first strategic choice, made 12 years ago by the Gobetti farm, was introducing crossbreeding to their entire Holstein herd. Not a common choice indeed at that time. 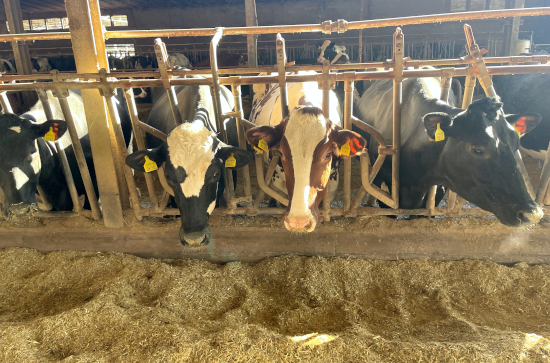 A 2-way crossbreeding system with Norwegian Red and Holstein has been the breeding strategy for 12 years. Photo: Luca Acerbis

But a result of very precise achievement: building a herd of cows with high milk and solids yields, great robustness and resistance to stress, high fertility and (relatively) easy to handle, and with zero inbreeding issues.

The preference has been for a crossbreeding scheme with two dairy breeds alternatively involved, Holstein and Norwegian Red. The first breed (Holstein) adds great genetic potential for milk production after decades of successful breeding in that direction.  The second breed (Norwegian Red) brings all the impressive health and fertility results achieved from their advanced breeding goal and data collection compared to many other breeds. Heterosis (or hybrid vigour) level in a 2-way crossbreeding scheme is more than adequate to the needs, and thanks to just two breeds involved all matings are simple to manage.

2-way crossbreeding has been for many years

When Marco Gobetti must select which AI bulls to use, he likes to keep things simple: he selects the best ones available both within the Holstein and the Norwegian Red. Only a few bulls per year for both breeds, with clear minds, the traits he wants to prioritize are protein Kgs, health traits, and fertility.

“Uniformity of the herd, on every level, has significantly improved over the years for the Gobetti farm, specifically, udders conformation that has made considerable progress” – expresses Diego Galli, EMEA regional sales manager for Geno, who has been involved in Marco’s breeding decisions since the beginning of his crossbreeding journey.

“Norwegian Red has been known for its excellent fertility and enviable health status since we introduced the breed internationally. However, we were also aware that we need to do some improvements on the udders conformation and milk production to provide a broad great experience to dairy farmers worldwide. Our breeding team has done an excellent job since, and we have been able to improve it with results that speak for themselves today.” adds Diego.

The milk production of Norwegian Red has also been significantly improved, and it is also visible in the performance of crossbreds at Gobetti’s herd with an average of 11,200 milk kgs/cow in 2021 (x2) compared to 9,000 milk kgs/cow (x2) produced 10 years ago.

This improved production of the 180 milking crossbred cows has allowed the farmer to better manage the herd’s size and slightly decrease the number of milking cows due to the Parmigiano Reggiano cheese quota system in place. The total number of replacements has significantly decreased too, thanks to the adoption of sexed semen and beef in the dairy breeding strategy.

By having less cattle in the barn, Gobetti farm has now more space in the herd to improve their animal welfare status which has complemented the benefit of Norwegian Red genetics with positive heterosis effects, resulting in continuous improvement in terms of health and reproductive performances.

Since – as it happens here – the pregnancy rate is steady at 25% (with a conception rate at 54%, with no use of sync hormones, and all dairy semen used is sexed) so there is absolutely no need to waste time arguing this. Everything that lies behind runs properly as the herd’s fertility is particularly good. In general, there are only a few problems to deal with, and the management flows in the routine without creating challenges.

Marco Gobetti then argues, “Of course, we could increase milk yield even more with a different approach, for example changing our reproduction strategy. But I believe it would not be much of an advantage. What would be the cost for those extra milk kgs produced in terms of health, drugs use, reproductive issues, complications in management, and, ultimately, other extra costs?”.

Health status is a strength of Gobetti farm and there are many reasons why.

It has already been said about the decision to do crossbreeding, how this has been successful also to provide more robust cows. Cows that are able to cope better with any kind of stress than pure Holsteins and without compromising on milk production and uniformity.

But clearly, it is not only a matter of genetics, even if it is key in the strategy. The adoption of a broad vaccination plan explains why the overall cost of drugs is exceptionally low and stable over the years. However, the crucial detail is that the focus has shifted from treatments to prevention, therefore less and less antibiotics and an increase in vaccination.

The adoption of the selective dry cow therapy here was not bound by regulatory deadlines, but rather, it was implemented as a positive consequence of having a healthy herd of cattle.

For years, antibiotics treatment has been limited to a small number of animals, with a threshold count of 200,000 somatic cell in the lactation. If the cell count exceeded the threshold in one of the milk records during the lactation, only, in that case, the cows will be treated with antibiotics. The same treatment will apply for those cows that need to be dried early, for example, in case of non-recovery following a metabolic disease. Normally the dry period in the herd is short, around 40 days.

Twice a year, during the winter and summer period, some extra thorough analyses are performed on milk samples to search for mastitis pathogen in cows with even the slightest rise in somatic cell count than the average. Historically, the average SCC at Gobetti farm has been approx. 150,000.

Gobetti starts working on the herd’s health status at a very early stage, in the phase of calf rearing. But even earlier, since the recovered space achieved (thanks to heads’ reduction) has been dedicated to the transition period of cows when the greatest need of welfare is required.

There is an area set up for cows in the last 3 weeks of the dry period and another area specifically dedicated for the cows close to the calving. The lactating cows are grouped into 3 subgroups: first lactation, second lactation, and older cows.

It is worth talking about an interesting detail about the cows at end of their career or the ones identified as not to be bred. For example, for those ones with repeated mastitis events. The robustness of crossbred cows due to Norwegian Red genetics, which is also known for having a good body condition, makes it possible for Gobetti to get good prices when animals are sold to the slaughterhouse. Under “beef income” an important contribution is now given also by the sales of beef x dairy Belgian Blue calves.

The calf rearing is the unit where the farmer has made the biggest efforts to improve management and performance. The rule for everybody involved is to be “obsessed” and spend a lot of time there, surely much more than the time usually spent by most dairy farmers. The attention to the cleanliness of pens, feeding and drinking buckets, quality of colostrum, etc. is extremely high and there are two important times every day - morning and evening – for prolonged observation of the calves to check their health status.

A feeder probe is used to supply colostrum to calves at birth, twice in the first 24 hours and in the following 2-3 days. After that, the beef x dairy crossbred calves are fed with cows’ milk while female calves are fed with a custom-made milk replacer.

Calves weaning is done at 63 days in groups of 4 calves each. Looking at the mortality rate of calves in the herd it is simple to say that all the excellent job, the extra attention daily given to the calf rearing, and the general high health status is paying off for the Gobetti brothers' farm. In 2021, with a total of 240 calves born, the mortality rate in the first 24 hours was equal to zero. Another number is speaking for itself.