HD Genomics is the unique genomics-based breeding program for Norwegian Red which is built on the foundation of Geno's long term progeny testing program.

Breeding value calculations by Geno are based on single-step genomic prediction. This means that all bulls and cows, both those who have genotype information and those who do not, receive estimated breeding values in the same step.

What is the advantage of single-step genomic selection?

The advantage, over commonly used 2-step methods, is that all available information, such as phenotypes, genotypes, and pedigree information on all animals is included simultaneously in the prediction of breeding values. This results in the highest reliabilities possible for the genomic breeding values of sires. 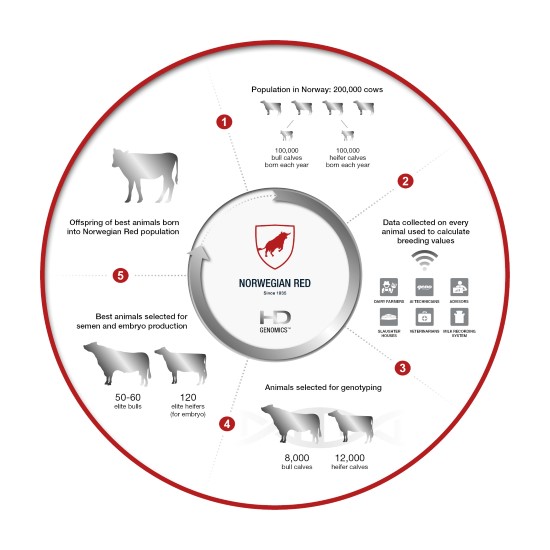 Elite heifers are the best Norwegian Red heifers in the population, selected for embryo production. The embryos are then sold to Norwegian dairy farmers. All calves from embryos are genotyped when born, and some of them are bought by Geno as new elite heifers/bulls.

We expect that many of the same Norwegian Red elite sires used in Norway will also be available for the export market All bulls in the domestic market are genomic bulls, and most of the bulls used in our export market are also genomic. However, we keep some bulls long enough to become daughter-proven, as there is still a demand for daughter-proven bulls in some international markets.

Some bulls are also selected only for export. These are bulls that have profiles that fit some markets internationally, and/or bulls that cannot be used in Norway because of kinship to the population (to prevent inbreeding). This is not an issue when used in crossbreeding.

The Norwegian Dairy Herd Recording System is run by the national dairy co-operative owned by Norwegian dairy farmers, TINE. It is certified by ICARs Certificate of Quality (International Committee for Animal Recording).

Data is collected from almost all dairy farmers in Norway, and from a whole range of sources.