Rotation of highly selected purebred sires from the most suitable dairy breeds has several advantages over the use of crossbred bulls in commercial dairy herds.

Increasing use of crossbreeding

The use of crossbreeding in commercial dairy herds has grown in recent decades, and this trend is expected to continue. Most of the crossbreeding in dairy herds has involved the use of purebred bulls, but the use of crossbred bulls has generated some interest in recent years. The question to ask is "What are the advantages or disadvantages of using purebred dairy sires in a rotation compared to using crossbred bulls?".

Examples of rotational crossbreeding and the use of crossbred bulls

These crosses are called back-crosses because there are only two breeds involved. They are also called F2 crosses. Once the second-generation crossbred female is breeding age, she will be mated to the least related breed. For example, if you have a second-generation crossbred female with the breed combination HO X (NR X HO), then she should be mated to an NR sire. But if you have an NR X (NR X HO) female she should be mated to a HO sire. This would be the F3 generation.

This same pattern continues with the use of purebred bulls in a rotational scheme and by mating females using a purebred sire of the least related breed. This rotational crossbreeding approach can be readily adapted to three (or more) breeds as well. In practice, the use of two or three breeds in a rotation is most common. 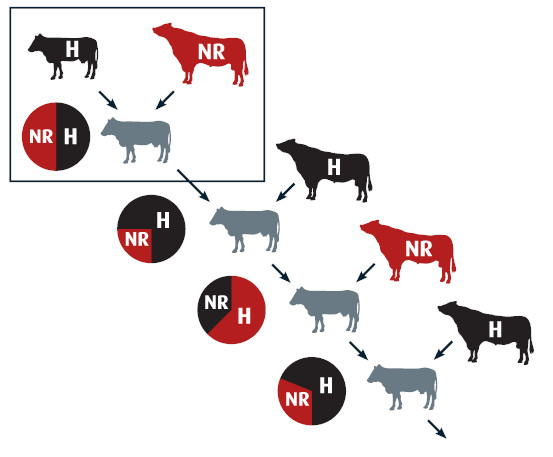 Modern genetic improvement programs rely heavily on very intense selection in both the females and males. This is to achieve very fast rates of genetic progress, and to provide commercial herds with top bulls for use in improving their herds. Large numbers of crossbred bulls could be produced using the best purebred females and purebred males. However at this point in most dairy populations, the selection intensity for crossbred bulls is far lower than what is practiced in purebred populations.

Purebred bulls result in a higher level of sustained heterosis

Heterosis or hybrid vigor is maximized when animals of unrelated breeds are crossed. First generation crosses (F1) or equivalent crosses such as the second generation cross in a three-breed rotation where the sire is from an unrelated breed to the female, provides maximum heterosis. Using purebred sires in a rotational crossbreeding system provides more heterosis on average over the generations than using crossbred sires than involve the same breeds.

To illustrate this more, consider a two-breed rotation versus the use of crossbred bulls involving the same two breeds. In this situation, the level of heterosis averaged over future generations of crosses is higher with the alternating use of purebred sires, when compared to the repeated use of crossbred bulls. The heterosis advantage from the alternating use of purebred sires in rotation compared to using crossbred bulls is not large, but it could be important for traits like fertility and health that are substantially impacted by heterosis.

Variability in performance, even for traits like cow size and body weight, can be important for efficient dairy production. This is why many dairy producers want uniformity in their heifers and cows. Uniformity especially allows for large herds to manage cows in large groups, but it can also be important for smaller herds where cows need to fit into herd facilities and produce milk that is most valued for the local milk market.

When using crossbred bulls on crossbred females, the resulting offspring can vary from something very close to the purebred of one breed, to something very close to the purebred of the other breed. It is interesting that scientists use the mating of crossbred females with crossbred males to generate variability for genetic experimentation, where they need lots of genetic variabilities as well as the mixture of genes from various breeds or lines. In general, commercial dairy producers would not favor this additional variability.

The use of crossbred bulls could be a mechanism to rapidly inject genetics from two or more different dairy breeds into a program where current females are from an unrelated breed. This system could be used, for example, when introducing modern dairy genetics into local populations to produce cows for commercial dairy production without having to wait for two generations to get genes from more than one dairy breed.

Heterosis is a term used in genetics and breeding and is also known as hybrid vigor.

Heterosis is an additional gain above the average genetic level of the two parent breeds. The bonus from heterosis should be approximately 5% for production and 10% for mortality, fertility, health and survival. Therefore the impact of heterosis on profit should be substantial for commercial dairy producers.