Anna Adamczuk, Managing Director of PH Konrad, talks about the dairy industry in Poland and why crossbreeding will be one of the best options to increase farmers’ profit.

Poland is the 6th largest dairy producer and has the third-largest dairy cow herd size in the European Union. Could you please tell us more about the dairy industry in Poland?

Dairy farming and milk processing are the most important sectors of agriculture in Poland.

It has big economic importance, as it is a source of income for many farmers.

Over the years, the Polish dairy industry followed the changing market conditions. That has resulted in more concentration of milk production and processing. This change has created a lot of leading and innovative larger farms.

However, we still have a lot of small or medium sized ‘family farms’ (About 30% of the farms has less than 20 cows).

Poland has the third position in terms of the number of dairy cattle in the EU (right after Germany and France) with approximately 130.000 dairy farms and about 2,3 million cows.

In 2019 we produced 14,5 million tons milk. Raw milk production exceeds balance consumption by approx. 20%. Our dairy plants produce a lot of different dairy products but especially cheese and curd (we are no. 6 in global cheese production). Since 2004, when we became EU members, the export of dairy products rose by 4 times the current situation.

As in most European countries, milk price is based primarily on the payment for the content of protein and fat. In addition, it must, of course, meet the requirements for the total number of bacteria and somatic cells, the number of which must not exceed one hundred and four hundred thousand, respectively. In most Polish dairies, the key element is also the so-called quantity surcharge.

Poland has been one of the “biggest winners” in the abolition of quotas in 2015. Of the “new-member states” to the European Union, Poland has had the biggest growth in milk production. It seems a very dynamic and positive time for Poland. Tell us more about the situation and what are the challanges in the future.

Poland's accession to the European Union in 2004 and the abolition of the milk quota in 2015 brought many changes to the dairy sector. After many years of stagnation, milk yield increased significantly, and the process of concentration and polarization of milk production took place. Milk production gradually began to shift to regions with more favorable natural and economic conditions. Already in the first quota year, half of the national milk quota was produced in three regions: Mazowieckie, Podlaskie and Wielkopolskie.

The abolition of the milk quota resulted in increased milk production but had also initially caused a decrease in milk prices. Farmers began to have problems with financial liquidity and covering their liabilities, so they began to increase milk production, which further worsened the situation on the market.

It can be expected that in the coming years the number of milk producers in our country will continue to decrease, while milk producers who intend to continue plan to increase their production.

A big challenge in the future will be to balance cattle breeding so that it is as profitable as possible. I think that in this case crossbreeding will be one of the best options to increase farmers’ profit.

When did you start dealing with Norwegian Red genetics?

PH Konrad and I have a long-standing business relationship with Geno and Norwegian Red.

It is going to be 15 years this year, an important milestone.

Our cooperation started in 2007 since at that time Geno had an international agreement with Semex for the distribution of Norwegian Red worldwide. Being PH Konrad exclusive distributor of Semex in Poland since 2005 we decided to take the opportunity to start representing Geno and promoting Norwegian Red.

I remember there was a conference with all team’s members when Norwegian Red genetics was introduced. We learned about the characteristics and strengths of the breed and the benefits that crossbreeding had to offer to dairy farmers.

What is the perception of crossbreeding in Poland?

As in many countries, Polish breeders have been historically focusing on pure breeding.

As East European country, breeders are chasing high yield and try to achieve same high production as it is in EU West countries and in the USA.

The most popular and represented dairy breed in Poland is still Holstein, but there is an increased number of dairy farmers, especially the younger generations, that are looking for and are open to introduce other genetics in their herds. They do not just focus only on milk yields but want to breed cows that are also very fertile, healthy, robust and can sustainably produce for many lactations. For them it is a matter of running profitable and sustainable business activities and they do not focus on the breeds to be used, rather on the results.

What are the main drivers for the sale of Norwegian Red in Poland?

When Norwegian Red breed appeared on the Polish market in 2007 it was rather unknown. Most of the farmers had never even heard of it.  So, initially it was used mainly to "recover" high producing Holstein cows with challenges to get back in calf. When cows had problems with getting pregnant, dairy farmers used Norwegian Red semen for the AI experiencing better conception rates than with Holstein semen.

Next step is to improve awareness of Norwegian Red was the introduction of SpermVital technology.

As often happens with new products, there was some skepticism at the beginning and the higher price than conventional semen did not favor its rapid growth. But then farmers started to talk to each other, sharing their observations and positive feedbacks, and it became clear that SpermVital was a great product to better manage the time for artificial insemination and to achieve improved conception rates.

But most importantly, farmers have started to see the positive results from Norwegian Red genetics. They have benefited from those crossbreds' calves being very healthy and with plenty of vitality since birth. Farmers also observed that the milk production of the Norwegian Red crossbreds was almost on the same level as Holsteins with better % of fat and protein.

Less lameness issues, less mastitis frequency, better fertility. In general, very robust cows were able to produce without too many problems.  Crossbreds were also smaller in size that was positively correlated with less feed costs. 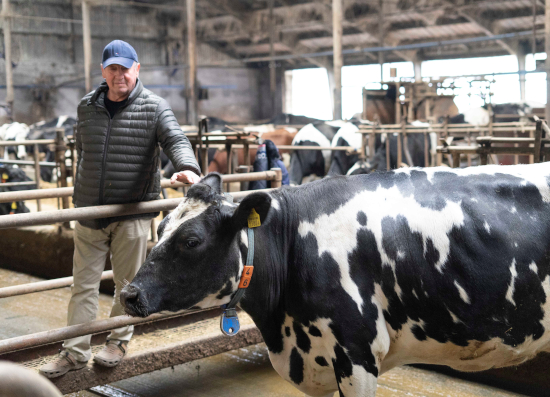 The good example is Pontus family farm which is located in the North-East of the country. They have 250 milking cows with over 100 crossbreds. Pontus family has been using Norwegian Red genetics for almost 10 years now and they are very happy about it. At first, they started with SpermVital but now they really look into the bulls’ pedigrees and chose the best Norwegian. The average milk yield of Norwegian Red x Holstein crossbreds is about 9000 kg per lactation with the best cows producing 12500 kg milk. Mr. Pontus is particularly happy with the health, the vitality, the easy calving, and the longevity of Norwegian Red crossbreds.

What type of dairy cow that the Polish farmers should expect in the next 5 years?

Due to the growing economic challenges, volatility of milk price and input costs, dairy farmers will have to focus even more on increasing the profitability of their operations. Probably increasing milk production will be of secondary importance and increasing milk quality and longevity will become the most important. As for the conformation of cows, farmers would have to reduce size. Medium size cows will be the best because of the needs of less feed.

The changes taking place in the EU, moving towards more sustainable practices, and taking better care of the environment and nature will also have a significant role in our industry and the how the cows in Poland will look like in the future.

Based on your extensive experience with Norwegian Red, what are your suggestions to a dairy farmer approaching it for the first time?

The breed has so many positive traits: great fertility, great health, and longevity. Over the years I have seen also a significant improvement in udder conformation and the breed has today a great milk yield potential to offer. Simply great genetics with unique traits.

Polish farmers today increasingly look at the best Norwegian Red bulls the breed has to offer and TMI (Total Merit Index) is a valuable index for us to select bulls. We experienced that it is a reliable index that guarantees positive results.

Many of our clients want to improve milk production so we recommend bulls with some standard deviations above the breed average. We also pay attention to the bulls' stature since our customers prefer a medium-sized cow, and they also want to avoid cows that are too small.

What do you like the best in your job?

In a simple word, I love my job and I cannot imagine any other. I have been associated with the genetic industry for 20 years, i.e., from the beginning of my professional career. It has been a remarkably interesting experience for me to be able to observe how this industry has changed over the years. Modern technologies and tools – sex-sorted semen, genomic selection, SpermVital are milestones causing an incredibly dynamic development of dairy cattle breeding all over the world.

I take immense pleasure in working with farmers and other people associated with cattle breeding. My work has allowed me to establish many interesting international contacts. Sometimes it feels like everyone knows each other in the genetics industry all over the world.

Plus, I am honored to lead a great team of committed, successful people in the genetic department of P.H. Konrad. It is a group of 30 people in which everyone is equally important and focused on ensuring that our clients get the best results.

Constant development and new challenges are something I need, and my work provides me with it every day.