“One health” for better profit

How can the breeding of dairy cows affect both human health and farmer’s profit?

Reducing the use of antibiotics in agriculture has led to a change in treatment strategies, optimized routines for preventive veterinary medicine, and a long-lasting emphasis on health in the national breeding program for Norwegian Red, the predominant cattle breed in Norway. Norwegian Red genetics gives the lesser need for antibiotic treatment which both combats antibiotic resistance and improves farmer's profit.

What is “One health”?

“One Health' is an approach to designing and implementing programmes, policies, legislation, and research in which multiple sectors communicate and work together to achieve better public health outcomes. The areas of work in which a One Health approach is particularly relevant include food safety, the control of zoonoses (diseases that can spread between animals and humans, such as flu, rabies, and Rift Valley Fever), and combatting antibiotic resistance (when bacteria change after being exposed to antibiotics and become more difficult to treat).”  WHO, 21st of September 2017.

How does antibiotic resistance occur?

Illustration by the World Health Organization. Click on the image for a larger image.

As the figure shows, all antibiotic treatments will favor the naturally occurring resistant bacteria over the sensitive ones, and over time create a resistant population. Better animal health e.g. lower incidence of mastitis, will reduce the need for antibiotics and thus reduce the favoritism of naturally occurring resistant bacteria. To make it more complex, bacteria have the ability to transfer genes coding for antibiotic resistance to other bacteria, who have not been exposed to antibiotics themselves. To keep it simple, reduced use of antibiotics leads to reduced occurrence of antibiotic resistance which leads to better public health, as it is all “One Health”.

A number of infectious diseases occur in dairy production. Antibiotics are often necessary to control them. The cost of e.g. a mastitis treatment is not only limited to the cost of antibiotics. Loss of production is the biggest item. Mastitis in one of the early lactations will raise the likelihood of premature culling. Reduced longevity affects the profit of the farm by raising recruitment costs. In addition comes all the hassle of having a sick cow, with extra work and worries. Genetics for good health reduces the need for antibiotic treatment and will raise the profit of a dairy farm.

Norway with the lowest use of antibiotics in cattle 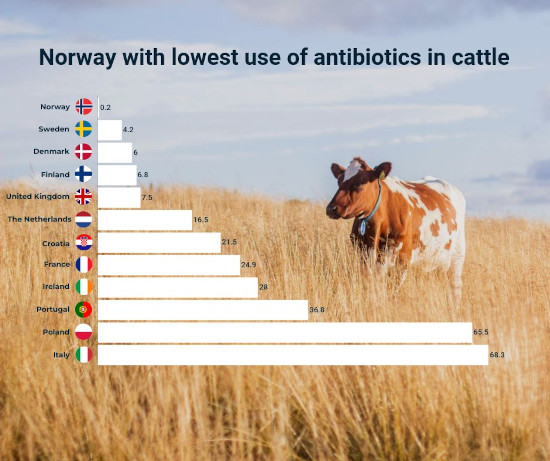 Chart: Sales of veterinary antimicrobial agents in 31 European countries in 2020 by the European Medicines Agency

Norway’s antibiotic use for cattle is the lowest in Europe. This is partly due to good management, cooperation between authorities, farmers, and veterinarians, and favorable natural conditions with long distances between small herds. Genetics of the Norwegian Red dairy cow is also of importance with low mastitis occurrence and low somatic cell count.

Health traits have been a part of the breeding goal for Geno and Norwegian Red since the early 1970s. Since the introduction of individual health cards for dairy cows in 1978, we have had accurate records of veterinary treatment, allowing us to choose only animals with good health as dams and sires for future generations. Introduction of Norwegian Red genetics in your herd might be a factor leading to lower antibiotic use, giving better profit for the farm, and contributing to public health as in “One Health”.

We will help you find a local expert!

Fill in the form on this page