This is due to increased health, fertility and calving ease coupled with keeping production at the same level.

The net profit per crossbred Norwegian Red (NRF) x Holstein Fresian (HF) cow is 130 Euro per cow per lactation in Ireland. This was presented by Frank Buckley at a Moorepark breeding forum, January 18th 2012.

Objective of the trial

To generate data which will facilitate the estimation of parameters pertinent to the provision of genetic evaluations for NRF sires and HF x NRF crosses in Ireland i.e. to put in place an "Across-breed Evaluation". At minimum this requires estimates of the relative breed effects (for the HF and NRF breeds) and the estimated level of heterosis (obtained when the two breeds are crossed) for the range of traits currently represented in the Irish Economic Breeding Index (the EBI). These are milk yield, fat yield, protein yield, calving interval and survival.

The trials were carried out on 46 commercial dairy farms mainly in Cork and Tipperary. Moorepark researchers gathered information from the performance of these animals over several years and lactations. This is strong research data – coming from a large number of farms and management systems.

The results of this trial show increased profits using Norwegian Red (NRF) crossbred cows. This is due to increased health, fertility and calving ease coupled with keeping production at the same level. 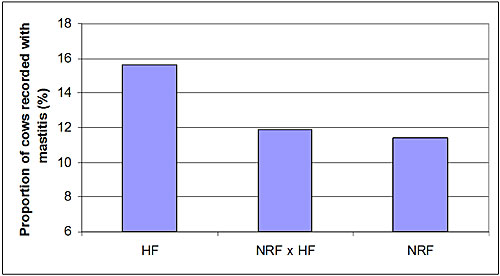